Will it work in the UK?

Yes – Solar works from daylight, so whether it's overcast or sunny a solar panel will be generating energy. Solar panels will of course produce more energy on a clear day with bright sunlight, and the length of day will also affect how much heat a solar panel can produce.

Our solar heating can work with any boiler or cylinder you specify, or can be fitted in to an existing system. It can supplement a full house central heating system, giving you a back up for times when less heat is generated.

Solar thermal Hot Water systems (SHW) are one of the simplest and most widely installed form of renewable energy systems. They work by transferring energy from the sun directly into hot water in your cylinder. SHW will even produce heat in the winter, but will require topping up to the required temperature using a secondary heating source, such as your existing boiler or an immersion heater. SHW complements your existing hot water system rather than replacing it outright, as well as providing a reduction in your carbon emissions, increasing heating efficiency and reducing long-term bills.

How does it work?

Solar energy is absorbed by solar collectors, usually mounted on the roof of a building. When exposed to sunlight the solar collectors heat up to temperatures significantly above the ambient air temperature, and once they are several degrees Celsius warmer than the water in your hot water cylinder, heat will be transferred to the cylinder for storage.

The panels themselves are usually a closed (indirect) system filled with an antifreeze mixture (heat transfer fluid) which is circulated around the system. This takes the heat absorbed by the collectors and offloads it into the hot water cylinder via a heat exchanger, in the same way as a conventional boiler. No mixing between the water in the cylinder and the antifreeze mixture occurs. 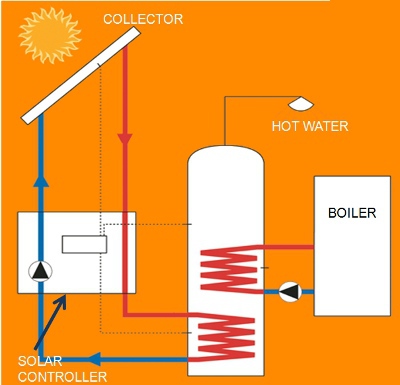 Got a plumbing or heating problem you need solving? Want some more information on our services? Need some advice?